Skip to content
It was two years after Flying Pig that I made it to Pennsylvania to run the Dicks Sporting Goods Marathon in Pittsburgh. My buddy Chad and I were looking for a spring race that we would be able to do together, as we had done the Flying Pig together in 2013 and we were training for a 50k a few weeks later. He is a big Steelers fan and my wives family lives just outside Pittsburgh so it worked out in for a few different reasons. I had some high hopes for the race due to great training over the winter, but another hilly route and a little bit of weather issues decided to make it more interesting.
Race: Dicks Sporting Goods Pittsburgh Marathon
Location: Pittsburgh, PA
Date: 05/04/2014
Finishing Time: 4:48:50

As we were planning for the trip, a few things came up which made my schedule a little tighter than I would have liked the weekend of a race. I had a senior portrait session scheduled the morning before the race and Kaela was on a work trip in Las Vegas, and was flying in that night to Pittsburgh to be there for me (so sweet I know). I got into Pittsburgh later than expected, so Chad picked up our bibs from the expo and met me at the hotel. Around 10pm I had gotten Kaela from the airport and spent the ride back to the hotel trying to explain the plans for the morning; where we were parking, where she would see me, and things she could do while we were running. Kaela is very visual person however, so when we arrived to the room I pulled out the map and confirmed all that we talked about. Now it was time to try and get some sleep to be downtown by the 7am start.

Chad and I woke up around 4:30am and met outside the room to try and grab some breakfast. We quickly found out that the breakfast area in hotel wasn’t yet open but there was a microwave in one of the “refreshment” rooms on the other end of hotel. There we were, sitting on the floor eating oatmeal and cliff bars, trying to make conversation to keep each other awake. Getting close to time to leave, we headed back to our rooms to finish getting ready and hit the road. Chad had just had a little girl and didn’t think it was a smart decision to have her up for the start, so his wife stayed back to join Kaela later in the day.
We ended up parking at Station Square just over a mile walk to the start line. It was a breezy morning but nothing that we weren’t expecting. But then came the weather that I again hoped would not happen, rain. It wasn’t much but it was enough to make me nervous looking back at what happen during both years I ran the Flying Pig Marathon. We made it to the start area and were surprised by the crowds. It started to rain just slightly harder and that apparently caused a traffic jam with all the runners trying to enter their starting corrals. We spent about 45 minutes just standing in place waiting for the race to start and to be able to actually enter the corral area. This was not the way that I wanted to start the race. Standing on my legs for that long in the cool/wet weather made my legs heavy and I knew that I was going to need to play it smart in the beginning of the race if I wanted to finish this race standing up.
And we were off! The course was broken down into a few different sections based on the sights and/or neighborhoods you went through. The first few miles were used to spread us out a little bit before getting to the bridges. Kaela was posted up before the first bridge to capture the smiles on our faces early in the race.

Pittsburgh is known for its bridges and we went back and forth over the Allegheny River three times between mile 3 and 5. The bridges weren’t all that steep but they did seem to go on a little longer than I remembered when driving them. There were a lot of spectators on the bridges but being it was so early they weren’t really awake and in a cheering mood. There was a guy in a kilt running the race, yelling at the spectators to cheer us on. We had gotten more humor from him than anything else. On the last bridge running north, we were able to get a nice view of PNC Park and also see Heinz Field off in the distance. The next few miles seemed to cruise on by as we made it back towards where we had parked that morning. This was the second location that we were going to see Kaela around mile 9 and the last one until the finish.

After we left the Station Square area, we headed to the Southside of Pittsburgh with a very “hipster” vibe in the area. Here the crowd support was in full effect with the sidewalks packed with people cheering us on. Around Mile 11 we split from the half marathoners doing a small loop around a block to end up on the other side of the same bridge the half marathoners were on. As we were crossing the bridge we saw the “hill” that we had seen on the elevation chart.
Now Chad and I reviewed the elevation chart and had just assumed that maybe there was “not drawn to scale” that we missed because of the giant spike around mile 12. We were wrong. As the half marathoners turned left to head back to the finish, we went right, straight up an exit ramp from the freeway below. About a quarter of the way up, we decided that better to power walk the hill as we were going the same pace as we were attempting to run it. When we finally got the to top, I was pretty winded but my legs still felt good knowing that was not even half way completed. Next part of race went through by University of Pittsburgh and through some nice old residential neighborhoods which made for some great viewing to keep my mind off of the rolling hills. Around the 17 mile marker I started to feel some heaviness in my legs. I told Chad to just go ahead of me while I tried to walk it out for few minutes.
I picked it up at mile 18 but then again at miles 20 and 22 had to stop the run and just give all I could to keep moving forward. I thought back to the beginning of the race, having to just stand for so long and wait for the start. One of the biggest encouragements at this point in time were the spectators. On both sides of the street there were people sitting on their front porches or the sidewalks yelling and cheering. Many playing music and also a few had set up their own “aid” stations to help the runners. They were cheering for all of us, no matter how bad we were looking.

Around mile 24 there were a few college kids with a table set up serving small cups of beer. I thought “hey, why not? I’m almost there”, which was a bad idea. The few sips of beer tore up my stomach and again had to walk quickly to get out a cramp. Just before the 25 mile marker, I made a decision that I was not going to stop until I crossed that finish line no matter how bad it hurt. And that is exactly what I did.

Coming into the final turn onto the Boulevard of the Allies, I could hear the crowd lining the final stretch and cheering so loud. I wanted to keep an eye out for Kaela but I knew that I needed to just focus ahead and make sure that I crossed that finish line.

(Kaela captured one of my favorite running pictures)

Just as in Cincinnati, I didn’t have the day that I had trained for, but I ended that day finishing a marathon. I met up with everyone at the family union area to find that Chad had to slow down a bit around 22 mile also so he didn’t smash me as bad as I thought he did. Again Kaela was there with words of encouragement, so proud of me and keeping me up when I was down on myself.

After the race we headed to the hotel got cleaned up and then headed to meet Kaela’s mom and sister for lunch before heading back to Ohio. We ate at the Jerome Bettis restaurant just outside of Heinz Field. I wanted to bring this up for two reasons. The first is because I had the BIGGEST piece of carrot cake I have ever seen (well attempted to eat it all) and second because they had the coolest bathrooms with one sided glass to make sure you didn’t miss the action going on at the bar. 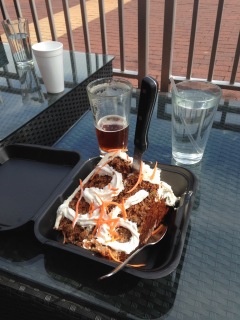 I went into Pittsburgh with high hopes to run a better race but knew that the hills were definitely going to challenge me. It was an amazing course with even better crowd support. I highly recommend it if you are looking for a well organized race in Pittsburgh. This was the first race of many that I had in 2014 and even though I did not finish in the time that I hoped, it was an awesome experience. Next stop  VEGAS!!! 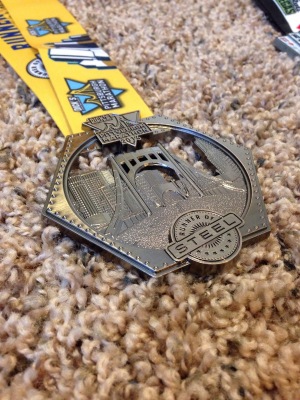